Soapbox is an open source software platform for building and deploying web applications using cloud providers like AWS. It represents our take on DevOps-done-right.

It’s informed by our existing work with government agencies, like the Centers for Medicare & Medicaid Services and the Department of Veterans Affairs, where we’ve successfully managed deployment processes and infrastructure by “baking in” practices such as blue-green deployments, monitoring, logging, alerting, and feature flags, among others.

It also provides a training ground for reinforcing and expanding Ad Hoc’s institutional DevOps capabilities. It’s owned by the Ad Hoc Infrastructure Team - an internal team that gives every employee an opportunity to contribute to internal projects and products during month-long rotations.

Existing hosting and deployment platforms, such as Heroku, Elastic Beanstalk, OpenShift, and Cloud Foundry, address various niches and use-cases, but generally they all promise to make provisioning, packaging, and deployment of web apps simple. While they are useful in some instances, they are, in our experience especially working with government agencies, usually some combination of too ambitious, too arcane, or too closed-source.

Our approach begins with a contract. Applications hosted on Soapbox must provide:

In return, the app is provided a port to bind to.

Over the course of a month, the Infrastructure Team built a proof-of-concept that can:

The prototype includes an API server and CLI built using Go and a web frontend implemented with Rails. In addition, the cloud service provider infrastructure is managed by Terraform.</p> 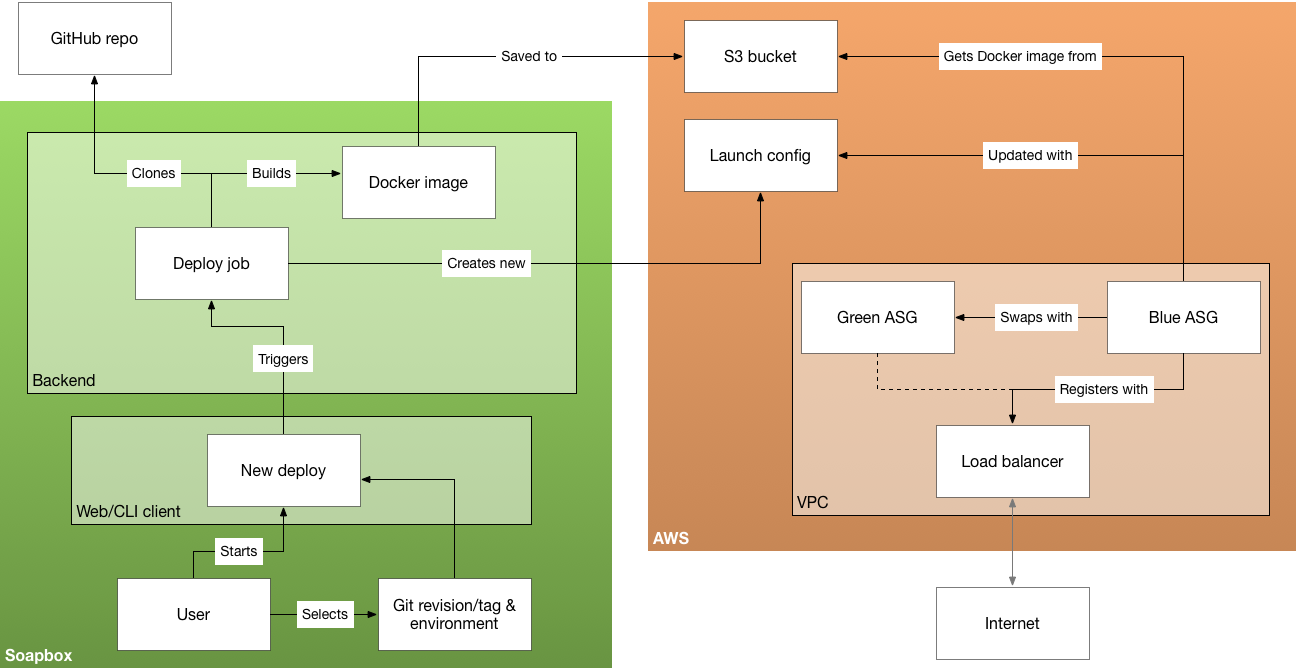 An overview of Soapbox’s deployment model

Soapbox is focused on:

Helping the government deliver services to people more efficiently and effectively is at the core of Ad Hoc’s mission.

Soapbox can help by simplifying the process of standing up cloud infrastructure and deploying software with agility in a secure and predictable way. Our government partners often don’t have the bandwidth or resources to transition to and maintain cloud infrastructure for their software. That’s where Soapbox can be helpful: it is an encapsulation of the best-practices we’ve learned deploying digital government services to the cloud.

The ultimate scope of the project is evolving. The next step involves a review of work done so far, cleaning up the prototype, and testing its efficacy with Ad Hoc’s internal apps. Later iterations are expected to: include the ability to deploy scheduled/cron tasks, make it easy for developers to add feature flags to their apps, and bolster monitoring, logging, alerting and security measures.

If you would like to know more, check out Soapbox on GitHub and view the in-progress roadmap.

Something we pride ourselves on at Ad Hoc is our preference to own the operations and maintenance for the things we build.

Accessibility: Start with the right tools

When people ask what I do for a living, I reply “Web accessibility designer.” I’m proud of that fact; I get the chance to make the web better every working day.

Embarrassingly automatable as the first step of legacy modernization

What engineering teams can gain by prioritizing learning