In the days following the initial launch of HealthCare.gov in the fall of 2013, the White House, under the direction of U.S. Chief Technology Officer Todd Park, assembled a team of top engineering talent from outside of government, including software developers, designers, and operations experts who had worked in Silicon Valley and technology startups around the country. Crucially, they all had experience delivering high-quality consumer experiences and operating high-traffic websites, exactly the expertise needed to run a site like HealthCare.gov.

Greg Gershman and Paul Smith, who would eventually go on to found Ad Hoc, were part of that original group. Known as the “ad hoc team”, the group went in among the contractors and government officials who had built HealthCare.gov. The team assessed the situation, delivered specific and actionable recommendations, and melded in with existing teams to provide leadership and guidance in service of righting the ship and turning HealthCare.gov around, so that it would be able to achieve its goal of signing up millions of Americans with health insurance coverage.

Through a concerted effort that involved long hours and constant focus, by the end of 2013, a mere two-and-a-half months after arriving on site, the team had helped bring HealthCare.gov, a site that enrolled a mere 6 people on its launch day, to the point where it could enroll hundreds of thousands of Americans each day in affordable health coverage, and the organization and processes it established during the rescue put it well on its way to becoming a stable part of the American welfare system. 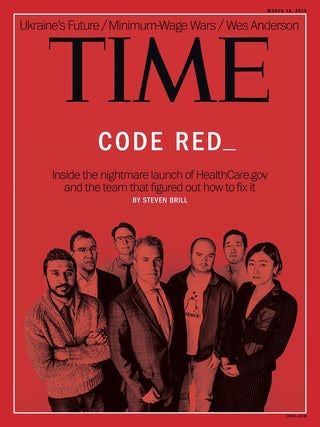 A fuller retelling of the rescue of HealthCare.gov can be read in the Time magazine story by Steven Brill, Obama’s Trauma Team.

Ad Hoc co-founder Paul Smith addressed the Enroll America conference in 2014 and talked about his experiences on the rescue:

The near-fatal launch of HealthCare.gov was a wake-up call for many who cared about the efficient and effective delivery of technology services for government.

HealthCare.gov was not a freak occurrence. Technology in the federal government, and especially systems that deliver important services to people, has long-suffered, with most major agency projects failing, either behind schedule, over budget, or simply not working.

The U.S. Digital Services Playbook, and the United States Digital Service, or USDS, came directly out of the HealthCare.gov rescue, with a goal of institutionalizing what the “ad hoc team” did that worked so successfully.

Ad Hoc complements the USDS mission, along with 18F and Code for America: all part of a “rebel alliance” that’s reforming the way technology is developed and delivered in federal, state, and local government, by infusing the public sector with private sector talent.

For more perspective on the lessons learned and the efforts made in the wake of the HealthCare.gov rescue, read Steven Levy’s article in Wired magazine featuring Ad Hoc co-founder Greg Gershman.

Podcast on responsive design at Vets.gov

The U.S. Department of Veterans Affairs (VA) today announced the award of a contract to a team of technology vendors led by Ad Hoc LLC, to design, develop, and operate vets.gov.