I found myself needing to measure the memory usage of a program throughout its run time and was surprised that I didn’t find a tool out there already that did what I wanted. After a bunch of work, I figured out that it’s easy to roll it yourself. In the hope of saving somebody that work in the future, here’s how to do it. This post describes how to run a process, sample its memory throughout its run using only bash and unix tools, and plot the results using gnuplot.

In my case, I was measuring an ETL process, but this technique is equally applicable to any process on your system. For demonstration purposes, we need a meaningless process that takes a short while. The process we’ll measure is:

On my system, this process takes about four seconds and returns no results. This grep search has three flags:

What is memory even? (A refresher)

On a modern OS, each process gets a virtual address space. This means it has access to a vast array of memory, which may or may not actually be stored on the RAM of the physical computer. The OS will, at its discretion, move memory pages from your process’ virtual memory into and out of physical RAM. One app may share memory with another; if two programs both load the same shared library, the OS will (probably, at its discretion) load only one copy into RAM.

There are two principal measurements1 of your program’s size, using this information:

The measurement we want is rss: the resident set size of the program we’re studying.

There are many tools to investigate a running program’s memory, but let’s examine ps. Its main virtues are that it’s simple and it’s available everywhere, in reasonably cross-platform fashion.

We can list the processes our user owns, sorted by memory: ps -m

In this case, we’ve asked it to show us pid, the process id of each displayed process; vsz, its virtual address size; rss, its resident set size; %mem, the percent of physical memory occupied by that process’ resident set; and command, the full command that is running. The -o option to ps allows us to specify what columns we want to display; look at the man page to see the full list of what’s available. The final piece we need is to limit this list by process id with the -p flag.

Here’s a command to get the pid of the top memory-using process on our system: ps -o pid= | head -n12

Finally, we can use that to construct a command to print out the rss of the process we own that’s using the most memory: ps -o pid,vsz,rss,%mem,command -p \$(ps -m -o pid= | head -n1)3

Now that we know how to measure a given process’ rss, we can go back to our initial idea of measuring the memory usage of grep -ris "banana" /usr/bin. Let’s start writing a bash script:

This script does the following:

To measure memory usage over time, we need to run that in a loop, limit the output a bit, and append to a file which stores the measured values. We’ll need a couple of tools for this:

Here’s a script that starts the process, creates a log file, samples the memory size every tenth of a second, and saves it to the log:

Now we have a logfile that contains two columns: seconds since program start and memory usage in kB. To graph it, we’ll use the handy tool gnuplot. It may not be the prettiest, but it’s available everywhere and simple to use. The simplest gnuplot invocation that shows us a graph is: gnuplot -p -e "plot \"\$logfile\" with lines"

We can also pass gnuplot a longer script on stdin; here we use it to show a graph in our console by adding this command to the bottom of our script:

Here we can clearly see that grep’s memory usage starts at about 2kB and jumps to about 1MB at the 2 second mark. Not bad for a short script!

We can also output a fancier graph. Here’s a gnuplot script that will output a PNG graph: 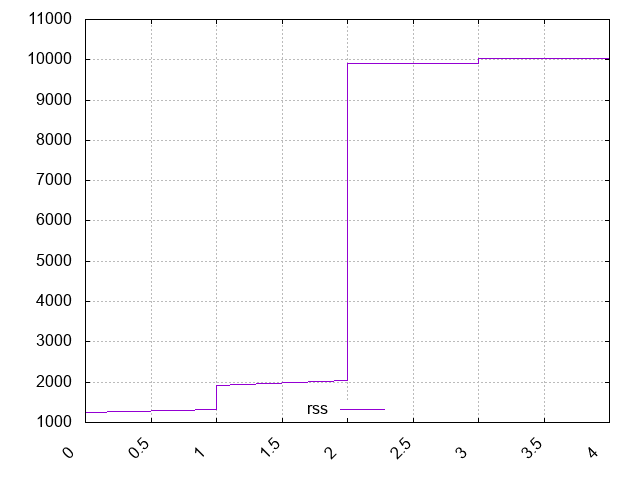 Customize the graph to your heart’s content using the gnuplot documentation.

That’s a brief trip into how we can use bash and gnuplot to trace and show a graph of a process’ memory usage throughout its lifetime. I hope you learned a trick or two.

1: On Linux there is a measurement called Proportional Set Size which attempts to factor out the shared space used by your program. If programs A and B have private memory of 500MB and share a 200MB library, the PSS will be 600MB for each. Mac does not really have this measurement, though you can mostly figure it out using vmmap

2: The equals following the output specifier tells ps not to print the header. From the BSD man page:

Keywords may be appended with an equals (=) sign and a string. This causes the printed header to use the specified string instead of the standard header. If all keywords have empty header texts, no header line is written.

3: Yes, we could sort by memory and head the output, but we’re going to need to specify a process ID later.

The power of being naive

Subject matter naiveté is our expertise. We’re hired to be experts in process, creation, and problem solving, and the primary tool we use to do this work is asking questions.

Becoming stewards of the social infrastructure

As an organization committed to improving social infrastructure, we must also put our research, design, product, and engineering skills to work on all aspects of public service delivery.

The carrots and sticks of platform governance

The building blocks of platforms

Setting the right benchmarks for site speed in government